How to Spot a Concealed Handgun 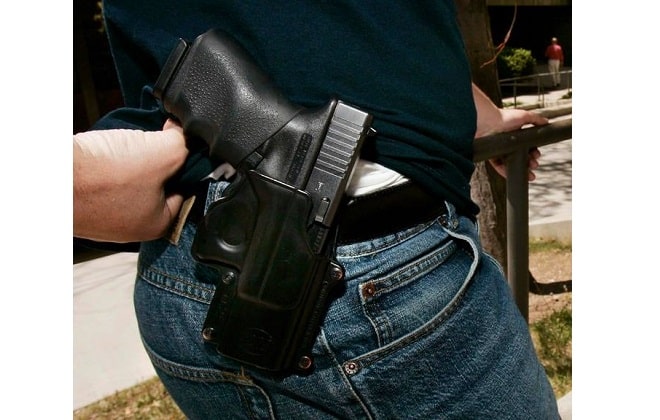 You’ve just recently gotten the hang of carrying a concealed firearm. You feel more at ease that you always have a tool to protect you. However, you realize that this isn’t a walk in the park. Even the smallest of handguns could weigh you down – ultimately making it obvious what you’ve been trying so desperately to conceal.

An experienced gun owner can spot an ill-fitted concealed carry on anyone. From the off-season baggy clothes to the imbalanced stance, these are but a few ways to suspect a concealed handgun on a person you encounter in public. However, human beings are crafty, and so the best way to protect yourself from unwanted surprises is just to assume that everyone is armed.

This may sound a bit extreme, but keeping this in mind will ultimately lead you to calm down and be effectively vigilant. Poor judgment never helped anyone – especially when paired with hot-headed irrationality. As a responsible gun owner, it pays to be observant about spotting concealed handguns, and here are a few tips on how to do just that.

How to Spot a Concealed Handgun?

You know how uncomfortable carrying a gun around can be. When your first put on a leather holster, it felt strange and bulky. You’ve had to check your weapon now and then, adjusting the straps, and pulling up your pants at odd times of the day. Easily, you can tell if someone else is going through the same thing.

In public, newbie conceal carriers will stick out like a sore thumb – regardless of their weapons being legal or not. They will often look fidgety and will constantly touch the area where they’ve concealed the weapon. Alternatively, they could also overdo looking natural and unbothered – ironically making them stick out even more!

Watch Out for Printing

The wrong choice of clothing often reveals more than it should – and the same goes for carrying concealed. A shirt that’s too tight will wrap around a handgun holstered on a torso, causing it to “print” on the carrier’s side. Some shooters will cover this up with a jacket or a bag, ultimately making it even more conspicuous.

Similarly, tight-fitting pants could also reveal an ankle or leg holster. At this point, you’d wonder if the owner had any intention of hiding the weapon in the first place. Nevertheless, their careless choice of a garment can be used to your advantage, as you can now keep a close eye on them and anticipate their movements.

Historically speaking, waistband holsters have been one of the most reliable ways to carry a handgun. The weapon is right where it needs to be; close to your dominant hand at a milliseconds’ reach. Having a conceal carry from the waist is quick, efficient, and convenient – but carrying it can be blatantly obvious!

Even with the right shirt and the proper demeanor, you can tell if someone’s carrying a concealed IWB by the alignment in their pants. One side will be lower than the other, and the subject will be constantly lifting this side. Gravity plays a huge role in this game of I-spy. So, if your suspecting someone’s carrying concealed because of their misaligned pants pockets, chances are you just might be right.

Ever had to swing your backpack to the side so you can pick up a dropped item? Or pull up a fanny pack so you can bend down to crouch? You don’t give it much thought, but this mannerism is called bracing. It looks completely normal when you have something in your body that’s in the way of an action you need to do.

Apply this mannerism to something that is supposed to be hidden, then you’ve got a telltale sign of an ill-fitted concealed carry. Gun owners with loose-fitting holsters are going to give themselves away when they must do even the most basic of tasks. You can see them brace for the action by pulling their carry closer to them or further back. Wherever it is they want to go won’t matter, because this action has already made it obvious that they’re hiding something.

Assume the worst, but keep calm

You can never be completely sure of a concealed carry until the last minute. For all you know, your suspect could be holstering a handgun in the least likely place. With that in mind, you should just assume that they’re armed – but don’t be rash about it. No one responds well to prejudice, and vigilance works better with a level head.