Can I Conceal Carry Two Guns 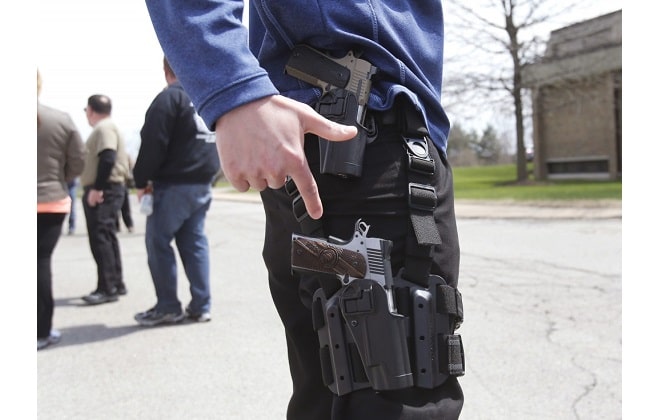 Carrying a gun assures you a lot of things. Safety is for one, and protection most definitely. However, like any tool, a gun is prone to malfunction. In the heat of a compromised situation, the last thing you want to happen is your trusty weapon getting jammed – ultimately endangering you and your companions.

This is where a second handgun comes in handy – or your “secondary”, in short. While your primary gun is tucked away where you have access to it, your secondary hides in case you need backup. While the chances of you needing both guns are low, you really can never be too sure. Think of it like having a spare tire, or an extra shirt.

However, carrying two guns isn’t the same as a spare tire. This is a loaded weapon that could cost innocent lives if misused. Most states don’t allow owners to carry more than one gun in their person. Additionally, there’s also this issue of where to put it. Should it be next to your primary? Should it be drawn with your non-dominant hand or otherwise? These are but a few things you need to consider before deciding on conceal carrying two weapons.

Can I Conceal Carry Two Guns?

Given the variety of waist, body, and torso holsters, you can conceal carry two guns. You can even carry more than that – even if you didn’t have to. What boils down here is how responsible you are in conceal carrying these weapons.

If you get caught in some skirmish and your companion is unarmed, this extra gun will come in handy for them. Similarly, if your primary gets jammed, your secondary (ideally a pistol) will then come to your rescue.

There’s a lot of advantages in concealing carrying two guns, but that’s not to say that it’s legal everywhere. Most states in the U.S. only allow a minimum of one concealed carry. If you happen to be traveling with your carrier, this could pose a problem. A lot of inter-state laws aren’t at all consistent with each other, so you should research ahead on where a double carry is allowed.

Is it safe to conceal carry two guns?

Ultimately, this is up to you and your responsibility as a gun owner. One gun at the ready should get you out of the toughest situations, so the second is just for good measure. If you trust yourself enough to carry two guns, then do so with the best of intentions. A gun is only as dangerous as the one who wields it, so be sure to only use it when you need it the most.

With that said, you must mindful of where and how to position your carry. The last thing you want is your arms getting entangled in a holster-y cross-draw mess. There are several ways to carry your second weapon, and ultimately where you choose to put it depends on your preferred convenience.

The ankle is a great area to hide a concealed weapon as it doesn’t get in the way of your main weapon – which ideally should be holstered to your waist. In a defensive crouched position, drawing your second carry from the ankle is discreet and convenient. From here, you can quickly hand over the second weapon to an unarmed companion, or draw it when your primary runs out of rounds.

Having your secondary near your primary plays an advantage – for as long as they are accessible to your non-dominant and dominant hands, respectively. One thing to avoid though is a cross draw where you wrap your arms around yourself and draw your guns from opposite sides.

While doing a cross draw may look cool in the movies, it’s a risky move. Torso-holstering your primary and secondary weapons incorrectly could ultimately cause some problems. For one, you could get caught up in your limbs. Unless if you’re performing for a show, avoid a cross-draw set-up.

Like the ankle, the small of your back also offers a nice hiding spot for your secondary weapon. If doesn’t get in the way of your primary, this spot will do you good in times of an emergency. Just remember to practice drawing your secondary with your non-dominant hand – to allow better efficiency, speed, and safety.

Conceal carrying two guns is a great way to heighten protection. But remember that a gun is only as dangerous as its wielder. In the end, it all boils down to who and how this weapon is used. Remember to understand the laws and limitations of this double-carry set-up, or any concealed carry set-up, and be mindful always.