What Is a Reflex Sight?

If you’re looking for a weapon attachment that’s an alternative to a traditional rifle scope with a wider field, then a reflex sight is probably one of the best accessories to help you with fast-paced tactical shooting. Reflex sights provide eye relief because you don’t have to position your eye in the same place each time. Instead, you can look through the lens with both eyes open, allowing you to maintain situational awareness through your peripheral vision.

But what is a reflex sight? Reflex sights include a sight window, typically with a dot reticle to indicate your target and give you an accurate sight picture. Anti-tank gun sights and anti-aircraft gun sights typically use reflex sights. If you’re looking for something to help with long-range shooting, then a traditional scope may be your best option.

The Difference Between a Rifle Scope and a Rifle Sight

A rifle sight is usually just a piece of glass with a limited scope that lets you focus your attention on a particular object in the distance. However, it doesn’t typically include magnification.

A rifle scope, also called a telescopic sight, uses a magnifier that allows you to see distant objects more clearly.

There are two main categories of sights: electronic sights (like reflex, holographic, laser, and prism sights) and iron sights.

Reasons to Use a Rifle Sight for Shooting

Most people like to use rifle sights and scopes to help them accurately aim and shoot, especially for long-distance shooting. You’ve probably seen snipers in films using scopes to ensure pinpoint accuracy from incredible ranges.

Rifle sights are useful for competitive shooters as they help with quick target acquisition. Because rifle sights enhance accuracy, they also help keep you safe. For example, if you’re hunting at night, you want to be entirely sure that you’re shooting at a deer and not a person.

Sights aren’t as good as scopes for long-range shooting. However, they are suitable for fast action shooting, target shooting, and hunting as they allow you to view the entire field with both eyes. They are also helpful for shooting at night if the lens includes illuminating lights.

There are many different types of rifle sights that you can choose between, which we discuss in more detail below. 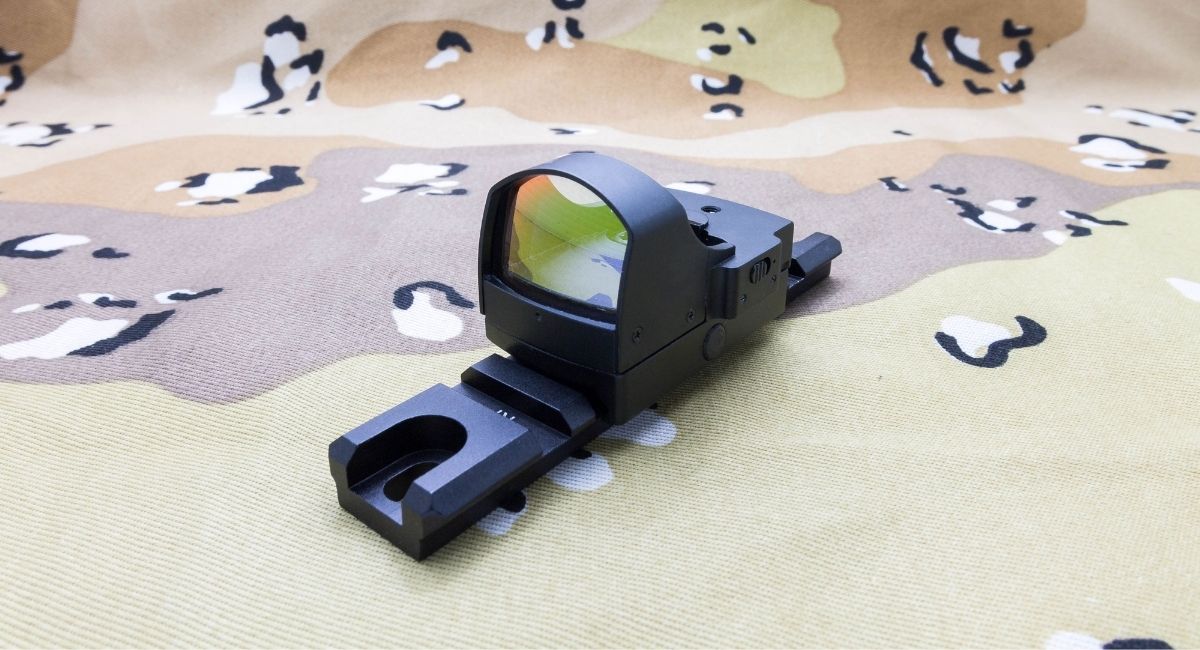 What Is a Reflex Sight?

A reflex sight, also known as a reflector sight or red dot sight, is usually a tube or a single piece of plastic or glass with a small dot or rectangle. This small dot is typically illuminated by an LED light at the rear optic that points towards the front lens.

There are two kinds of reflex sights: compact sights with one lens and a reticle close to the shooter’s eye and a tubular sight that looks similar to a scope with two lens pieces on either end.

These reflex sights are a type of optical sight invented in 1900 and often used on various weapons. In the past, they’ve been used on fighter aircraft in both world wars and for military applications like anti-aircraft guns and anti-tank guns. They are often used when there’s a fast-moving target. Since the invention of the red dot and LED reticle technology, reflex sights have become far more popular as they are durable and dependable.

Reflector sights provide a single, parallax-free virtual image that focuses on the target and removes the problem of aiming. Reflector sights are an excellent choice for amateurs and professionals alike.

Reflector sights are an alternative to iron sights. These sights can be held away from your eye without distorting the image. You can also use them with both eyes open and see the entire field of sight. An added advantage is that they remove most parallax errors and other issues typically found amongst sighting devices.

What Are the Alternatives to Using a Reflector Sight?

There are many different types of sights that you can use as alternatives to a reflex sight, some of which we explore below.

A prism sight, also called a prismatic scope, uses prisms to focus light. Prism sights don’t provide variable magnification, which means you will need to know what distance you’ll be shooting from before buying the relevant magnification. You can extend their effective range using various magnification. However, prism sights can’t avoid parallax errors entirely, but they are great for astigmatism.

Prism sights often place the reticle onto the scope, which means that even if you lose battery power, you can still use the scope (unlike a reflex scope that has a battery-powered LED light reticle). Prism sights also require you to keep your eye in the same position each time, whereas red dot sights allow you more freedom.

Holographic weapon sights don’t magnify images. Instead, you look through the optical window to see a holographic, 3-dimensional reticle illuminated by a laser superimposed on the field of view. You can adjust the sight for windage and range by moving the optical window at an angle.

Holographic sights are easier on your eyes, more accurate, and are often the choice of sight for close-quarter combat. However, their battery life is slightly shorter than a red dot sight. Additionally, they are typically bigger than reflex sights and need a rifle to mount, whereas reflex sights are more compact and can be used with handguns. 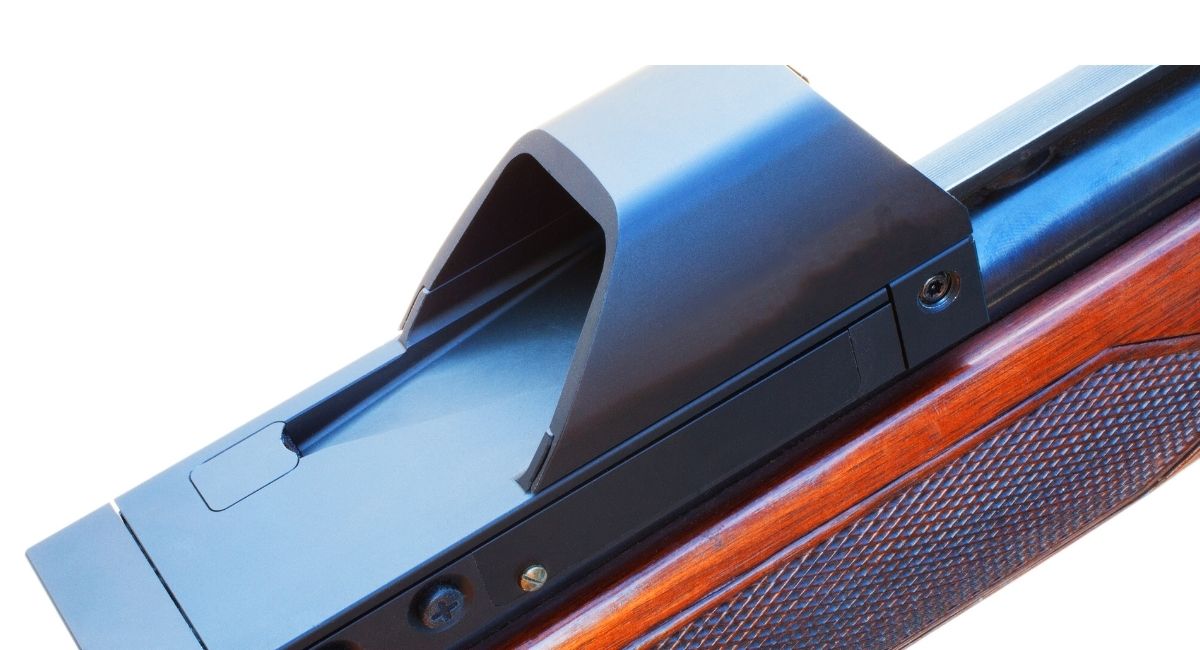 A laser sight also helps you zero in on a target, but these types of sights use a laser beam projected onto a target to indicate where you are aiming. They are mostly used by military personnel for law enforcement purposes, although some people use them for hunting and self-defense.

Magnified scopes, also called telescopic sights, use a refracting telescopic lens to provide an exact point of aim. Their advantage is their powerful magnification abilities, compared with non-magnifying sights like a reflector sight, holographic sight, or laser sight. They are primarily used on long-barrel guns like rifles and are usually attached via a scope mount. They can be combined with a night scope for nighttime shooting or hunting. They typically include various adjustment controls like elevation control, windage control, parallax compensation control, and diopter adjustment.

Pros and Cons of Using a Reflex Sight

There are many pros and cons to using a reflex sight. Below we look at the advantages and disadvantages of reflex sights to give a comprehensive overview of their abilities.

Advantages of Using a Reflex Sight

Disadvantages of Using a Reflex Sight

Having a sighting device is useful for many reasons. You may notice that many professional and amateur hunters use this type of hunting accessory. Reflex sights are also beneficial for home defense purposes or tactical shooting.

Reflex sights don’t have much parallax error and include LED illumination that allows them to work in different light conditions.

Reflex sights also help improve accuracy and can easily be used in a fast-paced shooting environment. Additionally, they are compact enough to be used on handguns. If you are looking for a versatile weapon attachment that can be used for numerous occasions, you may want to consider adding a reflex sight to your collection.