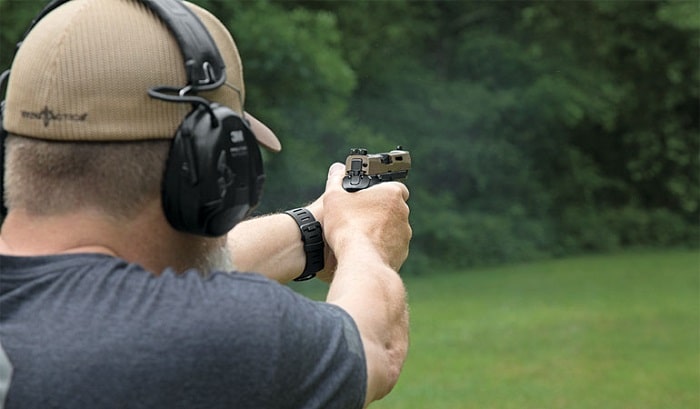 What is Recoil in a Gun?

You’ve probably heard the word “recoil” thrown around before. The formal description says that it means to flinch, wince, or drawback out of fear or disgust. In gun lingo, however, gun recoil refers to the kickback you feel after firing. When the trigger is pulled, the bullet is launched out of the barrel by a tremendous force.

As physics would have it, this force exerts an equally powerful push in the opposite direction – which you can instantly feel running through your fingers, hands, and arms.

While some may not see recoil as that big of a deal, it affects a lot of first-timers who haven’t quite gotten used to shooting a gun just yet. Over-anticipating gun recoil has been known to mess up with accuracy, and even cause injury. Ultimately, it’s the anxiety that gets to first-time shooters – sometimes bringing them to close both their eyes when they pull the trigger!

The shooting game may seem like an intimidating sport, but everyone starts somewhere. Every expert started out recoiling from their recoil when they first fired a gun. The key here is just to get used to the force, practice as much as you can, and ultimately gain the strength to keep both eyes on the target.

How to Fix Anticipating the Recoil?

Getting used to recoil doesn’t happen overnight. Just like conquering fear, this takes a lot of motivation, nerve, and some patience. The first thing you must remember is that you are not alone. All gun-wielding experts had to get used to recoil as well, so when it comes to running through guidelines, it’s a tale as old as time.

For the basic stance, align your feet with your shoulders and relax your knees. With your weapon in hand, bring your hands in front and lean slightly forward. This stance not only keeps you steady, but it’s also ideal for receiving the recoil. Practice this stance and make sure none of your muscles are stiff.

With the combination of a proper stance, a calm mind will help you spot your target better. Ideally, you shouldn’t even be thinking about hitting that bullseye just yet. Master your stance and breathing and try shooting with an unmarked target first. this takes the pressure from hitting the center and will keep you focused on your posture and handling.

In the end, to fit anyone’s gun recoil anticipation is just to keep practicing and practicing. You’re going to face that dreaded recoil sooner or later – but if you’re hesitant about heading down the shooting range to do this, you don’t have to use real rounds just yet.

There are many options to choose from when it comes to practice shooting. Look around your area for any virtual simulation shooting ranges, or load up a simulation gun with some CO2 cartridges. These will give you that accurate real gun recoil – minus the live rounds. Practicing several times a week for thirty minutes will ensure that your muscles will get used to receiving the recoil. If you keep at it, over time you won’t even flinch.

Remember to not rush yourself if you want to fix your anticipation for gun recoil. Some people may learn this trait faster than you, but if you find yourself rushing then you’re in for a world of hurt. Have faith in your daily practice and get used to gun recoil without a hurry. Your brain and muscles will eventually sync, and you’ll eventually be able to handle shooting the real rounds… maybe even hit a real bullseye!

Keep in mind that shooting is a fun, rewarding sport that requires a lot of discipline. Safety should always come first, so the last thing you want is a shooter who shuts their eyes the moment they pull the trigger. Your anxiety over gun recoil is not a beast you can shoot down – but rather, a beast you can tame. Be patient with yourself, and soon you’ll be receiving gun recoil like it was nothing.